Sherlock Holmes and the Hands of Othello is an action-packed performance, full of suspense and excitement. The climax of the show features a thrilling sword fight between Sherlock and a world-renowned assassin.

Our weapons master, Dr. Peter “Doc” Charles, and assistant director, Mac Lee, are both experienced swordsman, and took on the challenge of choreographing the fight sequence with professional zeal.

Here, Mac and Doc demonstrate a push disengage. This is an unorthodox, but visually effective, parry and disengage. 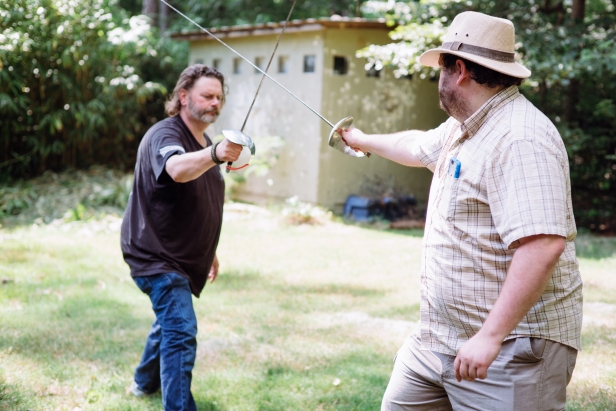 Doc studied saber fencing in the US Army, and also studied the French method of stage swordplay. Here, Doc and Mac practice a 3 parry and a 3 attack. Mac studied epee and saber at Clemson University. Here, Doc and Mac practice the coup de maitre, with special attention paid to the safety of the duelists. Director Sean Callot, also trained in swordplay from an early age, captures the movements to choreograph the final sequence with the actors.

Come out and see the spectacle that is Sherlock Holmes and the Hands of Othello, June 30 and July 1 and 2 at North Carolina State University’s Farrison-Newton Communications Theatre. Tickets are available now!

One thought on “Fight Choreography”

Please donate to help us achieve our goals!